May marks Asian American and Pacific Islander Heritage Month in the U.S. and Asian Heritage Month in Canada. To commemorate this month of celebrating Asian and Pacific Islander history, culture, traditions, and language, I’ll be spending the entire month of May recommending books written by Asian Americans (Canadians, Brits, and etc.) across a variety of genres including fiction, non-fiction, YA, science fiction and fantasy, and romance.

These are my personal recommendations for books that I’ve read and loved or books that I just haven’t gotten to but have earned their spot on my TBR list. These recommendations are in no way a comprehensive list of the number of English-language published novels written by authors of Asian and Pacific Islander ancestry. There are many books that feature and/or written by authors of Asian and Pacific Islander descent that I have yet to discover, which is my TBR list continues to grow daily because of these new discoveries.

To start off this month of recommendations, I’m starting with a genre that I love and that is romance. The genre of romance is a diverse one in terms of what falls under the umbrella of romance, from contemporary to historical to paranormal fiction, romance runs the gamut of fiction, and I’m going to try and cover all of them with my recommendations.

So let’s get to them!

Trade Me by Courtney Milan. Courtney is a biracial Asian American author and is one of my ride-or-die authors. She writes both contemporary and historical romances, all of which I recommend you check out on her website. Trade Me is my favourite novel that she’s written so far. It centres on the characters of Tina Chen and Blake Reynolds, who completely trade lives after Blake makes an offhanded comment about what it means to be poor in their shared university class. Tina knows what it means to struggle and worry about helping her parents make each month’s rent. This no strings attached exchange of lifestyles isn’t all that transpires between these two. Soon secrets, kisses, a few heated nights together, and a sprinkling of angst begin to weave their way into their peculiar arrangement. This is one of my all-time favourite novels that I’ve read, ever, and that I pretty much recommend to everyone that hasn’t tried romance or is looking for a new romance to read.

Hate to Want You by Alisha Rai. Alisha is an Asian American author of Indian descent and is also one of my ride-or-die authors. Alisha writes mainly contemporary romance and I’ve read almost all of them barring one or two which are on my TBR list. Hate to Want You was published last year and is the first in Alisha’s Forbidden Hearts series. This particular novel revolves around the characters of Livvy Kane and Nicholas Chandler and their long and tumultuous love story that began when the two of them were young. I absolutely adored this novel and the following two in the series. A Gentleman in the Streets is another particular favourite novel of mine that features a Japanese American billionaire heroine. Alisha’s books and characters are best described by the tagline on her website, “All the heat, all the heart.” I highly recommend you not only check out Hate to Want You and the Forbidden Hearts series but also all of Alisha’s other books via her website. 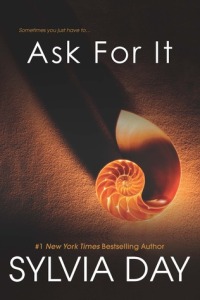 Ask For It by Sylvia Day. Sylvia is an Asian American author of Japanese descent and is probably best known for her Crossfire romance series. Alongside being a writer of contemporary romance she also writes paranormal/fantasy romance and historical romance. I actually discovered her works of historical romance years ago and have reread a number of those books on numerous occasions. Ask For It is a historical romance novel set in England during the Georgian period. It tells the story of Marcus Ashford, an agent of the Crown, and Lady Elizabeth Hawthorne, his former fiancée now turned intelligence source. The majority of Sylvia’s books, that I’ve read at least, don’t focus on characters of colour but if you are looking to scratch your historical romance fix she’s got you covered. For her look at her other novels check out her website.

Taken by Her Unforgiving Billionaire Boss (previously published as Vengeful in Love, a title I personally like better) by Nadia Lee. Nadia is an Asian American writer and writes contemporary romance, the majority of them in the centred in the billionaire trope area of romance. I’ve read a fair number of her books and Taken by Her Unforgiving Billionaire Boss remains my favourite of the bunch. (Read: this novel contains a fair bit of angst and I do love angst when it comes to romance novels.) The novel revolves around Natalie Hall, the adopted Chinese daughter of an American senator, and self-made billionaire Alex Damon. Secrets and lies bubble beneath the surface as these two face off against one another in the boardroom and the bedroom in this novel. I loved Natalie’s character in this novel and how she handled everything that was thrown in her way. It’s the first book in Nadia’s Seduced by the Billionaire series and you can check out the rest of her novels on her website.

A Study in Scarlet Women by Sherry Thomas. Sherry is a Chinese American author best known for her historical romances. Alongside her historical romances, she also writes contemporary romance and young adult novels. A Study in Scarlet Women is a gender-flipped retelling of Sherlock Holmes and the first novel in Sherry’s Lady Sherlock series. I do love a good retelling/take on Sherlock Holmes and A Study in Scarlet Women does just that. Charlotte Holmes takes on the alias of Sherlock Holmes to discover the mastermind and murderer behind a string of suspicious deaths in London that has suspicion falling on her family. With the help of a kind-hearted widow, a police inspector, and a love from her past, she’ll use everything in her arsenal to discover the truth and clear her family’s name. While I haven’t read the Heart of Blade duology by Sherry, it does prominently feature a heroine of Asian descent if that piques your interest. Check out Sherry’s website for more titles.

Now onto the books and authors who populate my TBR list that I just haven’t gotten to yet.

Nalini Singh is probably one of the most prolific authors of paranormal romance in the world, who also happens to write contemporary romance. Born in Fiji and raised New Zealand, this South Asian author has published over 35 books of paranormal romance and she isn’t stopping anytime soon. Silver Silence is the first book in her new Psy-Changeling Trinity Series and the book I currently have sitting on my nightstand. For all her other books check out her website.

Sonali Dev is another South Asian American author that has been on my radar for quite a while. Her novels have received critical acclaim and are centred on characters of Indian descent and with a Bollywood flair to them. Published in 2016, A Change of Heart was her third published novel and the one I have awaiting me on my iPad. For a list of her other books check out her website.

Helen Hoang’s debut novel The Kiss Quotient is set for publication next month, June 5th to be exact. Helen, a biracial Asian American, was diagnosed with Asperger’s Syndrome in 2016. Her diagnosis partly inspired the idea for The Kiss Quotient, which prominently features a technological savant main heroine who also happens to have Asperger’s. This book landed on my TBR list the moment I heard about it. The Kiss Quotient is the first book in a three-book deal that Helen signed with Berkley Romance. The next book in the series is set for release early next year. Check out her website for more updates and information.

Jeannie Lin is an award-winning author who writes historical romances set in Ancient China centred on Chinese characters. She also has a series of steampunk-inspired novels set during the Opium Wars in Asia called The Gunpowder Chronicles. Jeannie is really one of a handful of well-known authors who writes historical romances that aren’t set in England that I’ve come across. She’s been writing since the early 2000s and has published over a dozen novels and novellas set in East Asia. I currently have My Fair Concubine and An Illicit Temptation on my Kindle app waiting for me to devour them. Check out a full list of her books on her website.

Ruby Lang’s Practice Perfect series came to my attention when I was looking for a sports-related romance novel. Hard Knocks is the second book in her Practice Perfect series and revolves around the characters of Helen Chang Frobisher, a neurologist, and hockey player Adam Magnus. These two butt heads over the future of hockey in Portland while trying to deny the definite chemistry brewing between them. Check out Ruby’s other books on her website.

Jackie Lau is an Asian Canadian British author whose debut romantic comedy Grumpy Fake Boyfriend is set for publication at the end of this month. It is the first book in her new Kwan Sisters series, which is currently slated for a total of two books. Grumpy Fake Boyfriend follows Will and Naomi as they go away together on a couples’ getaway. The thing is, Will and Naomi aren’t really a couple. Will is Naomi’s fake boyfriend and also her older brother’s best friend who is going along for the ride as a favour to her brother. When the acting becomes more of a reality, these two put all their cards on the line to see if their fake romance could be something more. I first saw mentions of this book and Jackie on my Twitter timeline and I was immediately intrigued. She has a second series coming out later this year. For more info, check out Jackie’s website.

2 thoughts on “Recommendations for Romance Novels written by AAPI Authors”