When I started reading comics a few years ago, I knew next to nothing about comics. Comics, publishers, the comics industry, how it operated, and all the inner workings, were all a mystery to me. All I knew then was that the only place I could purchase comics was from a local comic book shop. Today, I know more about comics, the comics industry, and how the industry works through experience, research, and of course, reading, and the reason why I can only buy single issue hard copies of comics from local comic book shops.

The comics landscape has definitely changed in the past year since I covered the comics I was reading, and not exactly for the better. Two of the biggest names in comics, Marvel and DC (The Big 2), have seemingly made poor decision after poor decision. From cancelling titles before they’ve even had a chance to flourish to blaming diversity and women for poor sales, and turning some of their most well-known properties and characters into Nazi-like figures, Marvel and DC have made some pretty poor decisions in the last few months. Decisions that they are not rectifying, but in some cases trying to rationalize to their readers that it was actually their choices were actually good choices. (SPOILER: It isn’t.) This one top of all the other festering issues that dominate the genre as a whole has made me even more critical as a comics’ reader.

Compounding these factors for me was the stealth cancellation of Silk by Marvel. After a 26 issue run, Silk, one of the two Marvel titles headlined by an Asian-American female, came to an end. This cancellation hurt in many ways. Not only did I lose the comic series that got me into reading comics in the first place but I also lost that representation of seeing a female Asian-American character in the world of superhero comics. Cindy Moon is by far one of my favourite characters in literature ever. She was not perfect, she had issues, issues that we saw her struggle through, again and gain, and eventually, conquer in some cases. She was one of the few characters that I’ve seen in comics tackle mental illness and therapy in a realistic manner. We saw her triumph, saw her reconnect with her family, find love again, and become part of the greater Marvel universe. Saying goodbye to Cindy Moon definitely brought me to tears and I hope to see her again in the panels of comics one day.

The end of Silk isn’t stopping me from reading comics but it’s definitely going to change how I read and approach them in the future. So let’s get down to the comics I’m still reading.

Ms. Marvel continues to be a mainstay on my pull list and is now in the midst of a whole new arc for Kamala Khan & Co. Kamala is an Inhuman with the ability to morph size and shape. She is the defender of Jersey City and has done so valiantly while trying to maintain a work-life balance with her family and being a high school student. Kamala’s journey continues to be my favourite part of reading Ms. Marvel. I’ve watched her stumble and fall, and rise to the occasion and do what’s right, even at the cost of herself and her relationships. I’ve seen her evolve as a hero and as a human being. That journey of discovery is one of my favourite things about the series as a whole and why I’m going to continue to be excited to see where her journey takes her next.

I will be utterly devastated when Monstress comes to an end but for now, the end is not in sight and I can savour every panel and word from Sana Takeda and Marjorie Liu in delight. Monstress continues to be wholly unique in my comic reading repertoire. The world in which the story is set and the care that’s been taken into building it and the characters that exist in it has breathtaking. The story that Marjorie is weaving is spectacular. And there is nothing like the panels of artwork from Sana out there. The whole series is a gift and I’m in love with it. Issue 12 of Monstress will bring to an end the current arc that we’ve seen Maika & Co. voyaging on in the search for answers into her mother’s death and the monster that currently inhabits Maika’s body. I cannot wait to read it and delve even farther into the magnificent world that Marjorie and Sana have created.

America is the newest addition to my pull list and one that I’m pretty excited about. The character of America Chavez is not new to the Marvel universe, she’s appeared in a number of different titles over the years but this is the first title she is headlining by herself. She’s one of the most powerful characters in the Marvel universe, able to smash through dimensions like no one else. She also happens to be Latina and queer and starting a new path as a university student, which is amazing. The first three issues of the series were a delight to read and I’m really hoping that this series will stick around for a long time.

A new arc is set to begin in the Black Panther series as T’Challa begins to reconcile all that has happened to his kingdom, and the near-coup that almost brought Wakanda to its knees. The previous twelve issues saw T’Challa struggle to come to terms with being King again and the responsibilities and duties of being King and Black Panther meant in an ever-changing Wakanda. With the help of his friends, families, and a former adversary, T’Challa was able to stop the coup that sought to topple his kingdom and save Wakanda from greater bloodshed and destruction. Ta-Nehisi brings a depth to the series and its characters that make reading it that much more gratifying. I’m definitely interested to see where the story goes next.

I immediately added Invincible Iron Man to my pull list soon after the series was announced. The concept of the new series, a woman taking over the mantle of Iron Man piqued my interest. Added to the fact that, that woman is a fifteen-year-old African-American genius just made me that much more excited. The first six issues of the series has seen Riri Williams, aka Iron Heart, face down multiple foes, meet one of her idols, Pepper Potts, gain a ghostly AI of Tony Stark as her own personal Jarvis and coming to terms with being a hero and still being a fifteen-year-old who has faced an incredible amount of tragedy in her short life. The series is really starting to find its feet and I cannot wait to see Riri conquer the Marvel universe like I know she can.

Trades are the collected editions of single issues comics. They’re available for purchase in regular bookstores, online, and in digital editions. They’re a great way for readers to get into and catch up on series that they’re interested in and remove the sometimes-tortuous wait that comes with reading comics in the single-issue format. Trades are also cheaper to purchase than single issues and possibly why comic publishing companies, like the Big 2 in particular, are reluctant to advertise and push them.

I’m personally a fan of trades. I think they’re a much better way of reading comics as a long time reader of traditional literary books than single issues. They are way easier to transport than its floppy single-issue counterpart, too. Unfortunately, comic’s publishers tend to discount the actual and arbitrary value of trades in their bottom lines and sales numbers. Marvel’s cancellation of Mockingbird prior to the release of its first trade is an example of this phenomenon.

The trades that I’m currently reading include: Moon Girl & Devil Dinosaur, Bitch Planet, The Wicked and The Divine, Thor: The Goddess of Thunder and Saga. All of these are long-running series and in the case of Saga are multiple volumes deep.

If you want to get into comics whether it is from the Big 2 publishers or others like Image and Boom, trades are the way to go. 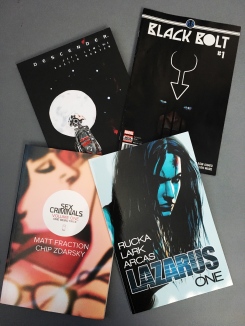 My to be read list is a never-ending list and one that I add to quite frequently. These are the series that I’m looking to pick up hopefully in the next few months.

While local comic book stores are the only way that one can purchase hard copy single-issue comics there are definitely other avenues that one can venture down if you’re interested in reading comics. Comixology is a digital platform from Amazon that allows readers to purchase and read single or collected issues of comics from a wide variety of publishers. They also offer an unlimited account that lets subscribers read as many titles as they want from a certain collection of comics, usually older comic series. Your local libraries are also another great way to read trade editions of comics that you’re interested in. Amazon, Book Depository and your regular bookstores are also another avenues in which to purchase trade editions of comics from.

Thank you for reading! I hope what I’m reading may possibly get you interested in picking some of these series up, too. Happy reading!