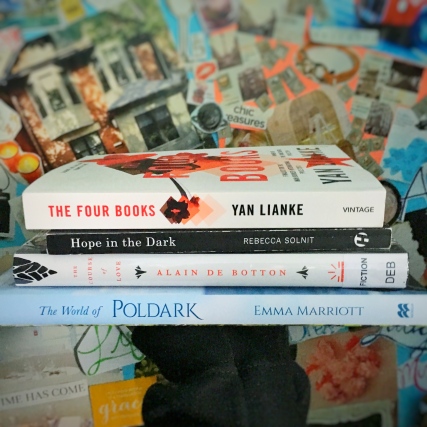 It’s July. We have officially passed the halfway point of 2016. I can’t believe it. It feels surreal that it is now July, but here we are. And here I am again to review the last five books that I have read. My aim this year has been to read more diversely as well as hitting that 50 Book Pledge mark. In total, I have read 30 books so far and 60% of my way into the 50 book pledge! Yes! Another 40% to go! I have also broken my self-imposed book buying ban because I could not help myself and because Chapters-Indigo was having a sale and was offering an extra 10% off if you had your books shipped to the store for pickup.

The Four Books was, at points, an uneasy novel to read because of the reality behind the fiction. The book is a fictional retelling of a period in China that is both controversial and utterly devastating in nature, that period is known as the Great Leap Forward (1958-1961). The Great Leap Forward was an economic development policy that was supposed to push the People’s Republic of China into a stage of economic development on par with the United Kingdom and the United States in fifteen years. It was an utter and complete disaster that resulted in a countrywide famine, killing millions of individuals. The book focuses on the lives of individuals living in the 99th district of a labour camp that was prevalent all around China to re-educate scholars and others who were deemed to have rightist ideals by the People’s government. As you read, you witness as these individuals are twisted and pulverised into paranoid, hopeless, damaged, hungry versions of themselves through the brutal policies and practices of those in power. It’s a blunt, powerful, tough read and a look into a period of time that more people should know about.

2. The World of Poldark by Emma Marriott

If you’ve been following me on Twitter you will know of my recent and deeply obsessive spiral into all that is Poldark, the BBC drama that debuted last year and about to debut its second series in the fall. This book provides a greater background into the making of the and development of first series of Poldark. You get to read profiles of each character, learn about the history of Poldark, which itself is a series of books, the time period and area of which the TV show is based, and all those pretty, pretty pictures of Aidan Turner and Eleanor Tomlinson and gorgeous backdrop that is Cornwall. It was a very insightful book and added to my already growing catalogue of all things Poldark. It’s not a necessary purchase, of course, it was just something I really, really wanted to read and happy that I picked up.

Hope is a powerful phenomenon, one that can be wielded to aid, inspire, and uplift individuals and/or groups in those moments of darkness, of uncertainty that we increasingly face more and more these days. The central message that Solnit shares in this book of collected essays, is that hope can guide us, strengthen us, and give us the will to move forward even if we can’t see an immediate change because of our efforts. Change does not come easy in our world, a world that has long relied on oppression, subjugation, and separation of those who have and those who have not, but it has and can continue to happen. I enjoyed reading this book, and there are passages and that I will return to again and again and that’s why I love reading Solnit’s work. There’s always something weaved in her words that help you find what you’re looking for, even if you don’t know you’re actually looking for it.

4. A Negotiated Marriage by Noelle Adams

I wanted a quick, fun, trope-filled romance novel and A Negotiated Marriage ticked all of those boxes. Molly and Luke married not out of love but because both needed that stability and career boost that marriage would provide the both of them. And for the last three years of their marriage that has what it has been all about, until Luke offers up an opportunity that neither of them has really considered in their marriage: sex, between the two of them. The attraction and chemistry between Molly and Luke grow, as does their actual relationship, both of them revealing more of themselves to one another. But when the man that broke Molly’s heart and one of the reasons she ultimately accept Luke’s proposal comes back into their lives, trouble comes a calling. I enjoyed the dynamic between Molly and Luke, and how they work as a couple in and out of the bedroom. This was a fun read that I really enjoyed.

5. The Course of Love by Alain de Botton

Every love story is unique; none are exact carbon copies of another. Some love stories are long and sordid, some are short and sweet, and some are a compilation of everything and nothing, but all have some type of flaw to it because we, as human beings, are essentially flawed. We are imperfect and thus are our relationships. In The Course of Love, we follow a couple, Rabih and Kristen, from their first meeting, through the dating stage, their engagement, their wedding and honeymoon, the arrival of their children, and everything in between and after. We see all the moments that this couple shares, some intimate, some not so intimate, some that have weight to them, some utterly mundane, some that show Ikea is really one of the truest tests of any relationship, and some that made me question the validity of their marriage. We get to see their thoughts, their feelings, their emotions, slightly more so of Rabih’s perspective than Kristen’s, which did unbalance the book a little for me. Throughout the book, we get these little snippits of how Western society sees and interprets relationships, which in turn help us understand the relationship between these two individuals a little better. What I took away from the book, fundamentally, is that marriage takes work. We have to be willing to try, willing to open ourselves up to another person, to be vulnerable, to willing to give that person that you chose to legally bind yourself to another chance, and be willing to love that person and their faults. Not all relationships work out, not all relationships should work out, but I’d like to think that Rabih and Kristen could see their marriage through till the very end if they were willing to try.

I’ll be posting these small reviews after every fifth book I read this year. If you’re interested in seeing what I am reading at the moment then check out my Twitter or Litsy (username: CiViiLy, for both) for the latest updates.

This is part 2 of recommendations for books written by AAPI authors. Again, this is far from a comprehensive list-it’s just a place to help you get started.
In lieu of my #AAPI book recs blog posts, I am doing something a little more streamlined this year. These are my recommendations for books written by AAPI authors. This is by no means a comprehensive list of books written by AAPI authors, it’s just a good place to help get you started.
2020 has not been the year any of us had hoped it would be. It’s been a tough year. I want to wish you all a very happy, healthy, and safe holiday season. May the New Year bring you happiness and prosperity.
Set in the quaint British village of Wedgeford, The Duke Who Didn’t is author Courtney Milan’s latest novel. This low tension friends-to-lovers features a Chinese heroine and biracial Chinese hero. I absolutely LOVED this novel. It’s one of the best books I’ve read this year so far.
👋🏼👋🏼
Hi! Haven’t posted in a while, hope you’re all doing well, staying safe and staying indoors as much as possible! Just finished the last couple issues of #Monstress and I love this comic so much! Can’t wait for issue #28!