In the first six months of this year, I’ve read about 30 books consisting of fiction, non-fiction, and graphic novel. I’ve enjoyed most of them, some more than others but cutting it down to one single book has been quite a task. But, I’ve done it. So here it is… the best book of 2016 I’ve read so far is…When Breath Becomes Air by Paul Kalanithi. 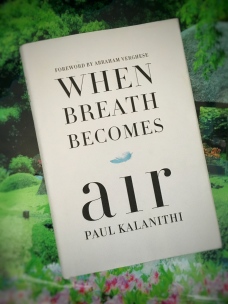 This book has already topped many must-read and best-sellers lists earlier this year. It is honestly one of the most eloquent, honest, heartbreaking, and surprisingly, inspiring books that I have read in a long time, especially considering the content of this book. It is a memoir; published posthumously, written by Paul Kalanithi of how he faced the most devastating news in his short life and how he lived it. At the age of 35, Paul, on the cusp of finishing his training as a neurosurgeon was diagnosed with advanced stage lung cancer. It was a blow that he never expected, but accepted and fought and lived through and ultimately succumbed to at the age of 37.

I first heard of Paul and his writings through the blog, A Cup of Jo, which was created and run by his sister-in-law Joanna Goddard in 2015 after reading one of the posts, entitled “Family News”. From there, I read a few of Paul’s published essays in the New York Times and Stanford Medicine. I was enamoured by his writing, his voice, his strength, his courage, his vulnerability, and his story. When it was announced that there was going to be a published memoir, it shot to the top of my ‘To Be Read’ list and I purchased it soon after it was released in January of this year. The memoir did not disappoint.

Be forewarned, you will need tissues and you will more than likely shed some tears while reading this book. I know I did, multiple times, and still do after rereading some of the passages of the book. But it is definitely worth the tears.

Paul wrestles with many questions that we all ask throughout our lives and he tries to answer them in the face of his own death sentence; his journey from doctor to patient. The memoir covers everything from medicine to morality, to literature, life, love, happiness, and family. Paul doesn’t shy away from any of it, he faces all the challenges, all the ups and downs, the laughter and the tears, with a quiet dignity that you can feel as you read the book. It is, quite honestly, a deeply beautiful read and one definitely worth picking up.

Paul died in March of 2015, leaving behind a wife and a baby girl, to whom this memoir is dedicated.

Do take Abraham Verghese’s advice, read the last paragraph of Paul’s book aloud. Listen to words, the cadence; let it sweep over you and take your breath away. If only for a few sentences.