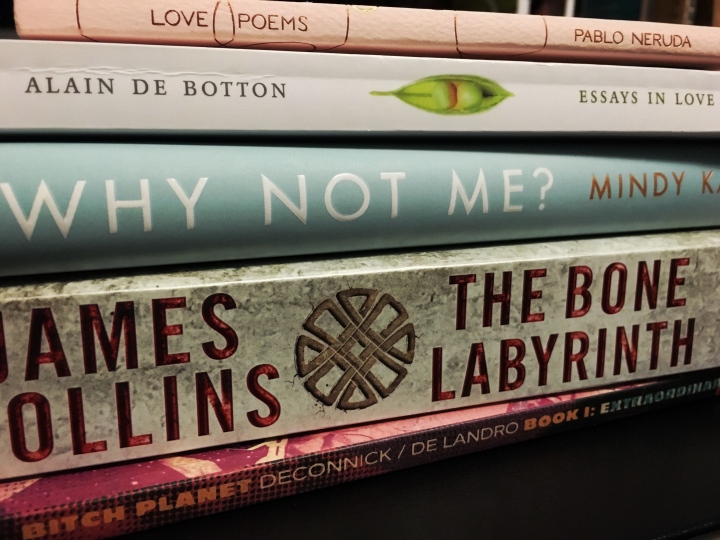 One of the challenges I set out for 2016 was to read 50 books this year. Not only that, but I also challenged myself to read more diversely as well. Currently, I am well on my way to accomplishing these challenges. Well so far, we’re only about part way through January, there is still 48 weeks to go.

This is the second book of essays written by Mindy documenting her life since the release of her first book. It is a witty, personal, insightful, and honest look into her life and all that comes along with being a woman living and working in Hollywood. Mindy’s accomplishments are awe-inspiring, and all due to the work, the talent, the effort, and the gumption she possesses. I loved reading this book. It made me laugh, it made me think, and it made me want to read more. And that is a sign of a good book, at least for me. It was a terrific book to start off the year with and checks my challenge of reading more diversely. A definite must read for anyone that needs a laugh or inspiration to get in gear.

I’ve wanted to read this graphic series novel for a while now. The praise and the subject matter of the series interested me greatly and I finally picked up the trade late last year. I really enjoyed it. Kelly and Valentine create this whole universe with riveting characters in Bitch Planet, it really draws into the story they are telling you and makes you question the patriarchy, racism, sexism and socio-economical issues that we see in our daily lives. It’s got violence, sex, swearing, and some of the most badass female characters that I’ve read in a long time. I was reminded of The Handmaid’s Tale written by Margaret Atwood while reading this trade, which is never a bad thing. Non-compliant!

This is the 11th novel in Rollins’ Sigma Series and it definitely isn’t stale. I’ve been a fan of this series since 2010 when I picked up one of the early novels in the series before going on vacation. Subsequently, I devoured the book while on vacation (I mean, who really needs to pay that much attention to the Summer Palace in Beijing? I certainly didn’t.) And when I came home I bought all the all ready released books in the series and devoured them too. Rollins uniquely combines history, science, adventure, some romance and conspiracy into each of his novels. They all definitely have a formula to them and I do consider this series as one of my top summer reads (this book was originally scheduled to be release in July 2015 but was pushed back to December 2015). The subject matter of this book centered on human evolution, genetics and animal testing (the animal testing part did really get to me in this book). It was definitely an interesting read and one that I enjoyed. I personally prefer Rollins over Dan Brown any day of the week.

Of the first five books I read this year, this one was my favourite. (It might even be one of my favourites for the year. Stay tuned.) The book documents a relationship from the very beginning to the very end, following the male narrator through the trials and tribulations of falling in love, being in a relationship, and having your heart smashed into 25+ pieces. It is honestly one of the most beautifully written books I have ever read. The cadence of the writing and the voice that the narrator has captures you and makes you empathize with what he is feeling in all those different moments of a relationship and it really is a rollercoaster of a ride. It’s a very honest look at falling in and out of love. I love the book and would recommend it to anyone. Read it!

*Thank you to Tanya for recommending this book to me!*

The imagery that Pablo paints with each of his poems is breathtakingly magnificent in this collection of love poems. This was the first time that I’ve read such a condensed collection of his poems in succession. I didn’t read all the poems in one sitting. I read some one at a time, returning to them again and again, and others all in one sitting. My favourite poem in the collection is titled “Your Laughter”. My favourite line being the first line, “Take bread away from me, if you wish, take air away, but do not take from me your laughter.” Laughter, I think, is one of the most important parts of any relationship, romantic or not, because it sustains us through the dark times and allows us to look forward to the good.

I’ll be posting these small reviews after every fifth book I read this year. If you’re interested in seeing what I am reading at the moment then check out my Twitter for the latest update.

Currently reading: Men Explain Things to Me by Rebecca Solnit